so yeah, i’ve been quiet for a couple of weeks..and the reasons being – i was enjoying my every second in wellington 😉 nah..i went there for the graduation ceremony and thinking that it might be the last time for me to be there so i treasured my time really carefully..and seriously, it’s such a lovely place..always is..

it’s been 6 months since i left so there’s quite a lot to catch up..and the first thing i caught was the newly refurbished international arrival hall..not really a hall but they have this new and shiny ramp..haha..but at that moment, i stopped myself from counting the new things..they made me feel as if i’m in a strange land..not good, not good 😕

a lot have happened within that six months so that getaway was highly deserving for me..i took it as a vacation..and counting again, my biology really needed a vacation after every six months..so thank you for that trip, i’m feeling great again 🙂

so alhamdulillah, finally i’ve graduated and i had the people i love around when it was happening..i really couldn’t ask for more..thank you 😀 here are some photos i snapped on my way back home..and the cat i’ve been missing! ♥

a few hours after sunrise, and this is 3600ft above the sea level..yes you can still see the mountains..and the coulds are so low..i love how the rays give colours to the clouds..

here’s a closer look at the valleys of the mountains..and there’s still rays! 🙂 i wasn’t sitting at the window seat but all seats are empty where i was seated so i was free to move around..too bad i was at the front-est..i couldn’t lift up the divider to lay down and sleep 😦

i didn’t pay attention all these while..now only i realised it’s surrounded by water..river or sea, i’m pretty uncertain 😛

from sydney i had a stop over in adelaide..dropping their passengers and taking more to be brought to singapore..and unfortunately a one hour drop off was delayed for 3 hours..because one of the pilots are ill, and they needed to find a replacement..i saw two pilots and co pilots before departing from sydney..i wonder if they really needed 2 pilots to fly A330..way to go Qantas..and this was the cafe, the airline was offering a $10 drink voucher for the delay..and adelaide airport was small..not much to do there.. 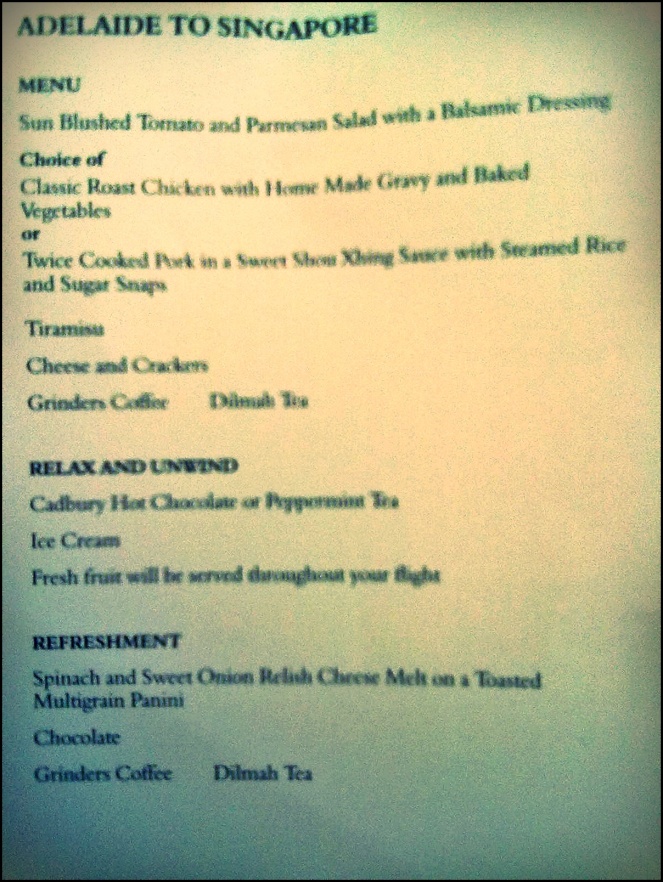 last but not least, the dinner menu offered on QF flights..well, i had a different MOML..so yea, just a guide for those who needs it..and to be honest, the food aren’t so bad 🙂 and the flight was calm all the way from wellington to singapore! the first flights i could sleep well w’out having to wake up due to nasty turbulence..phew~

here’s one or two things i picked up from the long and serious conversation i had with a dear friend..women just can’t involve in a sexual relationship without a strong emotional attachment..unless it’s their profession..

may be this issue is context specific – i’m talking about the women from the east, where religion and traditions play an important role in their socialization and in turn, shapes the kind of romantic relationship they might choose..to them, and being one of them, if you’re to ask “would you mind the break up if you’ve had a sexual relationship?” i’m sure most of them including me will say “yes, we’ll seriously mind and we’ll have a hard time to get over it..that is if we can ever do it”

well to think about it again, it wouldn’t only be the people from the east who would think of it that way..as long as they’re women, they’d have a strong emotional connection with sexual relationship..i don’t really have a literature to cite here but go watch friends with benefits, you’ll get my point..nevermind where they come from, they’d get sensitive and emotionally attached especially when it involves sexual relationship..

time changes and the new generations are receiving a lot of exposure especially from the media..so they watch the cheesy korean drama for a start and the dreamy and romantic images trigger their desire into having such a romantic relationship..and when they have something similar or quite close to it, they start to desiring something more “fun” like a sexual relationship..and they have plenty of available resources to help them to be good at that..(p/s no i’m not blaming the korean drama nor it’s the sole reason that could spark desires)..

and, for some, they’d just go for the “fun” parts undermining the cultural consequences..it might occur to them things like “would i regret it? does he deserve this?” but at that moment, they think they can bear the consequences..

but when they eventually find the time to think about all the things they have done, they might even regret their kisses – for realising that their partner might not be the one they’d like to live with..or finding uncertainties in their relationship (the partner might not be ready) or finding out the true colour of their partner (their middle name is cassanova without you realizing it)..

i might sound conservative, may be i am..but no matter how much civilisation has changed us, there’s value in each relationship, especially in sexual relationship..especially with eastern people, they’d still find themselves torn between desires and culture..if you reach that stage in a relationship, it’s crucial to appreciate and value the favour highly..and it has to be visible if not audible, outside of the bed too..

so they say it’s not gonna be easy..
and you’ve seen people proving to you it’s hard..
it seems to you as if you’ve already known your destiny too..
but hey,
the very basic creation of a human being is made nonidentical..
it should convince you enough that you’ve different path to walk on..
it’ll scare you, drain out energy off your system..
i couldn’t change that even if i consistently scream to you not to freak out..
but for once, you really need to keep believing you’ll get through this..
i see efforts i see determinations i couldn’t see reasons for you to screw it..
*hugs*
you have my prayer with you..
nevermind what the outcomes would be,
you’d still have the same person standing behind you, for you to fall back on..
good luck sayang 🙂

how time flies, it’s december again..last december i was attending the summer school up in karori and teaching hayden the right way to go back home from that campus..then, instead of enjoying the summer in wellington i opted to come home not knowing that december would be so meaningful..so, welcome again december 🙂

so my cousin’s daughters play with ipad and wii..and shanes and i have been talking about how “we” are the last generation who can play outside of the home without having strict supervision from mommy or daddy..and how information is not as accessible as typing “how to” on google..

with time, things changes..and as much as i want the older generations to understand how me and my generation work with things, that’s how i need to be understanding of how the next generations work their way out with things..including preparing myself with things like this:

kids these days, they really know where those hot models come from..and their scope of social studies is too broad now that they have information on their finger tips..

"The real voyage of discovery consists not in seeing new landscapes, but in having new eyes." -Marcel Proust-

Translate this blog into different languages...